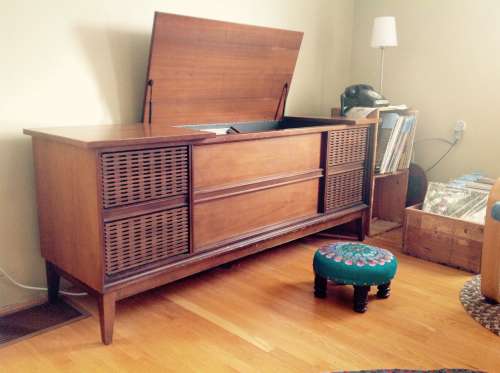 I have been dreaming for years about the magical some day when I would get one of those giant wooden beast console stereos like the one I used to play with at my grandparents' house. When I was kid we 'chicken danced' all around Grandma's living room until I got a little older and figured out how to run my parents' stereo and turntable. Then it became about making mixed tapes from Mom and Dad's ABBA and Beatles records. So when I was casually looking online last summer and saw an ad for a vintage console stereo less then five minutes from home I sent a message immediately. We negotiated from $200 down to $50 after the broken turntable was discovered. The man said he and his wife bought the Philips stereo in the 1960s when they first got married and needed to get rid of it now that they were retired and downsizing.

We brought the stereo home and hiked it up on wooden boxes so Andrew could slide in and out from underneath the stereo like he was working on a car in the garage. It wasn't very long before Andrew had the insides cleaned up and working so we could use the FM radio. He then hooked it up to a rarely used laptop and an old temperamental AirPlay so we could at least use the stereo as speakers for the music on our MacBooks and iPhones until we could replace the turntable.

We installed lights inside the stereo cabinet. They glow from underneath the stereo in every colour of the rainbow to set the mood.

We agreed to give a used Dual 1219 turntable that we found at our favourite record shop in Barrie as our Christmas gift to each other. After pulling out the old one and sawing out the hole to fit the new turntable we wired it up and had a working stereo then immediately put on the Led Zeppelin IV album.

Our record collection is growing exponentially. We spend weekends trolling for used records in every little record shop, Goodwill, and flea market we can find. Andrew is slowing rounding out the 80s synth record collection of his high school dreams while I'm working on collecting the oldies and classic rock essentials. 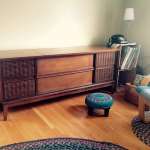 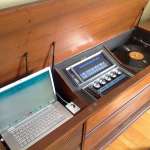 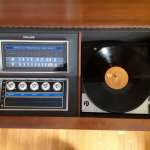